Gaskin first gained notoriety in 2011, with “Mr. Bartender”, an original ballad showcasing his powerful voice and knack for storytelling. Following the success of the debut single from his freshmen album, he performed at a variety of venues including those during his time on tour with multi-platinum and Grammy-nominated duo, Big & Rich; and several visits to the iconic circle that sits center stage at the Grand Ole Opry.

After stepping away from Nashville nearly 10-years ago, Bradley Gaskin is ready to debut new music and begin touring again after recently signing with an independent label, 30A Life Records. 30A Life Records is headed by Walton County local, Jack Cole; and Missouri-based, Bob Clark. Currently tracking new music and set to release a full album later this year, Gaskin will bring his songs, both original and beloved classics, and stories to Main Street DeFuniak Springs.

“After listening to Bradley’s stories and songs, I am thrilled to have someone with his talent performing in DeFuniak Springs,” said Main Street Executive Director, Chelsea Blaich. “Bradley’s background and upbringing is something many can relate to, having led a blue-collar life prior-to and following his success with “Mr. Bartender”, but his talent and musical accomplishments are unlike anything we’ve been able to showcase locally in quite some time. Knowing Bradley’s efforts on his new album and his vocal ability, Main Street is fortunate to have him perform before he finds more fame.”

Bradley Gaskin, along with musical guests, will perform two 45-minute sets. Taking advantage of the intimate setting, concertgoers will enjoy Gaskin’s recollection of stories from his initial rise to stardom, stories from the Grand Ole Opry,  and what the future of his music looks like during a 15-minute Q&A intermission. 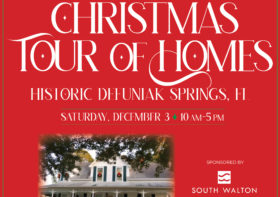